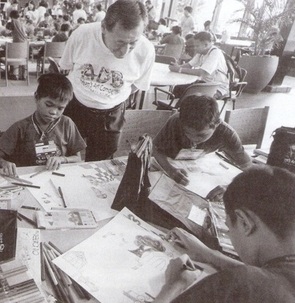 The Kaibigan Ermita Outreach Foundation (or Kaibigan for short), was originally established in 1986 in – as the name suggests – The Ermita district of Metro Manila. In the early years, Kaibigan was envisaged as a small outreach service for the many poor and vulnerable children who gathered in that neighborhood – in those days a notorious red light district. In the 1980s many poor children made a livelihood in Ermita by begging, selling flowers and cigarettes, and sometimes engaging in prostitution. The first services provided by Kaibigan were counseling and on-the-street assistance. Very quickly, the need to provide educational opportunities for these children became apparent.

Aside from many hundreds of children now sent to school each year by Kaibigan, the impact of the foundation extends deep into the six communities it serves, reaching mothers, fathers, siblings, local officials, other NGOs and government offices. While it is probably impossible to quantify precisely the extent of this outreach, it maybe asserted with confidence – especially after talking with the local community leaders themselves –that Kaibigan now reaches several thousand people each year. Kaibigan’s influence, reputation and example are constantly growing.

For many years, Kaibigan strove to make a difference to the lives of street kids in Manila. By the 1990s an essentially child-centered approach had evolved and over the years more programs and services were added, including camping, adolescent reproductive health seminars, sports and arts, case management and sporadic income generating activities for selected groups of mothers, the latter albeit with only limited success.

All the while, Kaibigan worked hard to become more relevant to the groups it served, and through partnerships, training and self-assessment exercises further refined its fundamental approach to the problems facing its poverty-stricken clients, namely, urban and street children.

By the start of the new millennium, Kaibigan, recognizing that development and social programs worldwide were beginning to change, began to examine and assess in a much more in-depth fashion its existing programs and services, and some major changes were implemented after informal program assessments took effect.  After questioning and testing its former practices and approaches – and the effects they were having on client children – a view emerged among key stakeholders that Kaibigan’s programs should be strengthened and realigned more directly with the families and the communities, and not exclusively targeted at the children themselves. Kaibigan staff and management began to fully recognize that it was the problematic families and communities which were creating problematic children, often leaving them with no option but to go out into the streets and lives of high risk and low expectation. Stemming from this realization, new community-based programs and services were designed and developmental activities began to be rooted in the communities themselves. At the same time and in tandem with these new approaches, Kaibigan’s more traditional programs – including outreach work, teaching/educational activities, and a range of recreational and health-related services – continued.

Finally, in 2005, after two decades in development work, Kaibigan undertook a major and comprehensive strategic planning exercise, involving the Board of Directors, management, staff, mothers from the community, and, most significantly, representatives of the client children themselves. By looking closely at and critically reviewing its past experience, Kaibigan was now in a position to chart a new course for the future – and to ensure that future reviews would  keep the processes of growth and evolution in motion.

Whereas previously Kaibigan programs and services had been exclusively child-centered (i.e., focused only on the development of the child) they would now be built around the concept that assistance given to a child is more effective, long term, and sustainable if it is contextualized in the child’s family and community.

Under this new orientation, Kaibigan’s programs and services were strengthened, made more comprehensive, and broadened – no longer would they be aimed at the child alone; henceforth they would address key issues facing his or her family and community as well. The relationship between Kaibigan and families/communities thus fundamentally changed. From beneficiaries (receivers of services), they now became active and equal partners of Kaibigan. This transformation meant that not only would individuals become empowered – they would in turn be able to empower others. A ripple effect was born, with Kaibigan acting as the instigator and generator of new ideas and practices throughout the communities it served. Communities would now be encouraged to identify problems and take action to make the changes necessary to improve their own lives and the lives of their children. Fully subscribing to the dictum that prevention is better than cure, Kaibigan’s new strategy was essentially preventive in approach, identifying and nailing down problems before and where they start, rather than reacting after problems had spilled into the streets.

From the start of the new community-organizing approach, the mothers of Kaibigan’s client children helped out in various ways, notably protecting the interests of children (ie, monitoring their studies, health issues, mobilizing the children to participate in various recreational activities, and so on). Many of Kaibigan’s community activities are today assigned to the Kaibigan community leaders (parents of child beneficiaries, 99% of whom are women), under the guidance and assistance of Kaibigan’s own community workers. This organizing of Kaibigan’s community-based women has now really taken hold and plays a significant part in the life of the foundation. Today, these women’s groups are sufficiently well organized and trained to initiate and manage a broad range of community activities. In short, the people are organizing themselves, addressing serious issues, and working to overcome their own problems. Kaibigan also ensures that its community leaders are trained in human rights and the rights of their children.

From all this, Kaibigan’s new orientation has been distilled: organizing poor communities in the 5th district of Manila.

Community organizing – and the partnership between Kaibigan and its community groups -- is now a central feature of Kaibigan’s work in the six areas in which it operates. Local leaders (today there are 48 of them, eight in each community) are given opportunities to take charge of their own communities and to examine the needs and available resources. From there they form plans as how best to respond, and assist in their implementation. They have learned to network with the barangays (local government units) and other individuals or organizations that can help them, as well as undertake other activities such as fund raising, etc.

In the wake of this basic shift in Kaibigan’s thinking, philosophy and approach to helping poor children, a new Vision, Mission and Goal (VMG) were all formulated and approved by the Board of Directors: